Since I love both history and language I thought this video was both amazing in giving new insights and intriguing as it makes you want to learn more.

What a love for the Russian language can do for you.

The folklore museum is a continuation of the history of Lefkás from where the Archeological museum In Lefkás Town finished. As you may recall I said previously that there was a big gap in the history of Lefkás from when the Romans left until the Venetians turn up in the 15th century. Other museums in Lefkás details other aspects of Lefkadian life but these are based outside of Lefkas town.

The folklore museum covers the period from the Venetians in the 15th century, through the Ottoman Empire, French, British and finally when they are free to rule themselves. There is also Santa Maura fort Lefkás if you wish to see the result of these battles.

At the start, it documents the newspapers, geography and men’s occupations like the ball game they used to play which is like boules. It also talks about the activities of the market place or the special events of Easter and Faneromeni which is coming up on Monday 17th June.

The emphasis here though is very much on female life as the are drawers upon drawers of women’s clothes, there is household linen and how it was made in the first place, carpets, examples of food that they ate including information about wine, olive oil, Eglouvi lentils and bread.

It also shows upstairs the setup of a typical bedroom and dining room. There is a loom on display that they would have used so that clothes could be woven. It details the different types of dresses worn by a girl, a bride and a woman as well as Sunday dress. There differences between rural and urban ladies are listed on the wall with what was expected of both. It also talks about the dowry that went with a girl upon marriage.

In the very last room is a music room with pictures of Aristotle Valaoritis, Angelos Sikelianos and Agni Baltsa. This is to complement the bouzoukis you see in the entrance hall. For related musical posts see here:

For examples of my work see here Series links.

Dominikos Theotokopoulos is a well known Byzantine painter that I have actually heard of before I came across this reblog. He is not usually known by his full name as it is quite a mouthful hence they shortened it. It’s much more memorable that way too. If you search for El Greco you can find lots of information out there but I just like the native viewpoint as you don’t come across it often.

St Nicholas is the patron saint of fishermen and he has a chapel dedicated to him near Sappho’s Leap at the southern end of Lefkás. Saints associated with Lefkás, their churches and shrines.

There has been a temple to a deity of some kind for a long time. In the days of Sappho, it was Aphrodite trying to escape the rapturous attention of a mortal with the assistance of Apollo but the temple has long gone to be replaced by the chapel that is now there. If you wish to find out about that time visit Archeological museum In Lefkás Town.

This area was later favoured by Angelos Sikelianos, his wife Eva Palmer-Sikelianos and there friend Nikos Kazantzakis. I have told you all plenty already about those 3 characters and if I ever visit there I will be able to tell you more.

The thing about Lefkás is you can’t learn a lot online, books are better but to get an actual feel for these things, you have to see them for yourself. It’s a very Lefkádian thing as they don’t really do social media even for business purposes so if you want to communicate anything you have to see them. There old fashioned and traditional which is unusual in this modern world but also kind of nice.

From the lighthouse on the promontory called Cape Dukatos or Lefkás depending on the era in question, you can see a fabulous sunset, take beautiful pictures and enjoy the view of neighbouring Ithaka and Cephalonia.

Is there any groups of famous people in your country?

Lefkáda – Panagia Fanoroemeni Monastery (the Virgin Mary) is revealed on August 15th. There are many churches with the same name with the most famous in Cyprus thanks again Google. There is a monastery for her on Lefkás about 3km from Lefkás town. It includes a religious history museum, maritime museum and a zoo. The Venetians had some input to the architectural structure too. This is why it’s the best looking, most well maintained and well known monastery on the island. I am yet to visit this place but you can see many pictures online and on the Wikipedia article there is some info Lefkás but best check elsewhere as it’s rather lacking.

Lefkás town – Santa Maura 3rd May. There is a fort dedicated to her at the top most point of the island. I haven’t visited her either as it was closed the day I wanted to go.

When they have weddings here it is traditional to honk your horn all the way through the village until they get home which can be quite some distance. It is a very noisy affair as the horn is sounded whenever they feel like it so about every couple of minutes. This is every vehicle in the procession so it can be a cacophony of noise. Just like the Easter celebrations except more vibrant as this is early evening instead of midnight.

White church – This is the church on the top of the island that everyone sees and sometimes they have weddings up here. The panoramic views across the entire area are phenomenal. 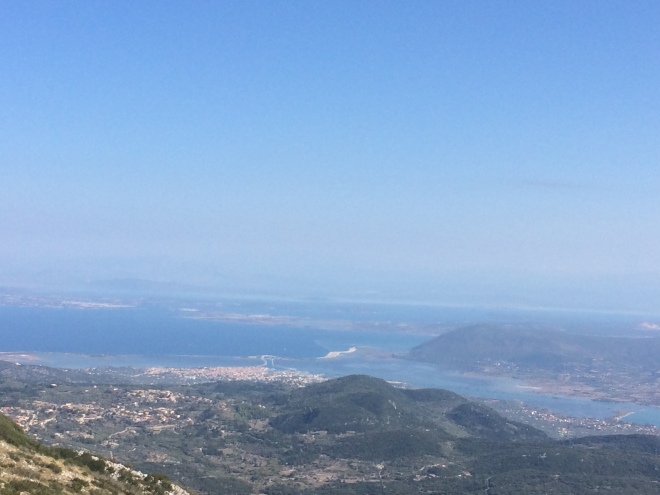 This is the shrine below dedicated to her and the church that is nearby. I’ve been inside too for a lovely christening but I didn’t take any pictures as there were 2 professional photographers but I don’t know if I’ll ever see the photos of that event. 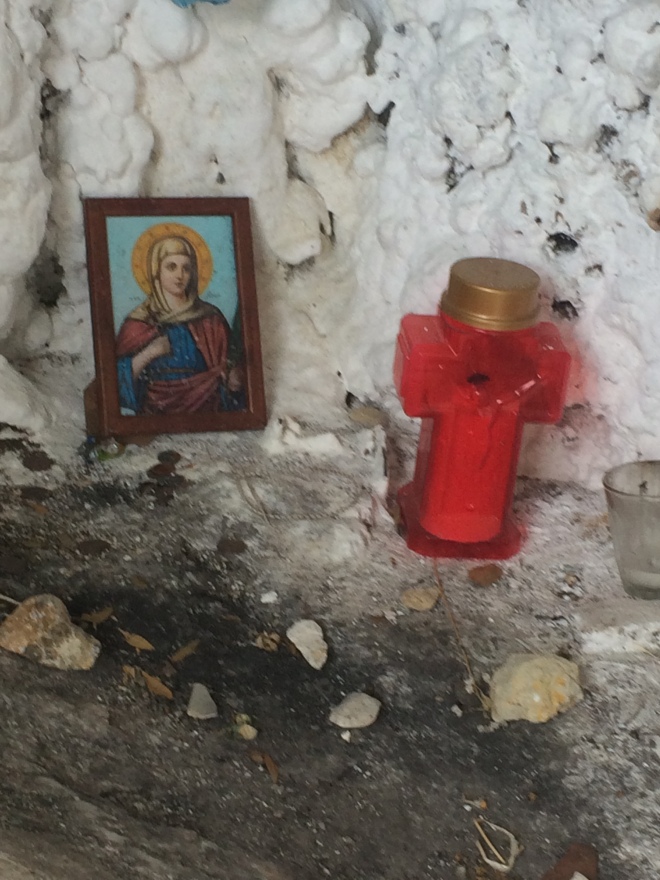 As you can see I have visited some areas and not others due to there location.

Do you have any special saints that you worship where you are?