Join 1,072 other followers
Follow The English Introvert on WordPress.com

This is a movie all about how Audrey Hepburn’s life gets turned upside by a man called Cary Grant.

In the translation department she spent most of her days.

Shooting off french into English all day when a couple of translators started making trouble in the neighbourhood.

She got in one little argument with her family and they were like your moving to your husband’s with all your belongings in Paris.

She pulled up to the house as her marriage license now says as Mrs Lambert I’m entitled to this.

She said Yes I’m a lady of leisure and I don’t need to work anymore!

When her husband died it was such a charade.

But she wanted settle the matter of her now being the widow of the late Charles Lambert.

I saw this and then I read it – it’s the curious incident of the dog in the nighttime. Followed shortly after by this as it’s on the adjacent page. I knew nothing of what it contained so it was a real joy that I could actually read this without resorting to Google translate. 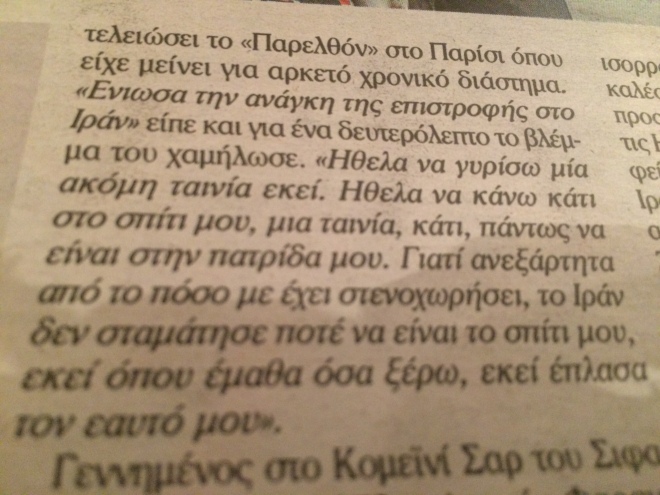 The article starts with Penelope Cruz talking about what she thinks of what I now know to be world famous Iranian director Asghar Farhadi. This bit didn’t initially make sense so I had to read it a couple times and keep coming back to it. It makes sense when you realise Penelope Cruz is Spanish and he has worked in Spain. I read this in a rather bizarre manner hence this is constructed in a rather odd way. A bit like myself really.

Where an Iranian filmmaker Asgkar Faranti, is talking about his love for his home country Iran and how long it took for the film displayed in the picture of the article and that he has just been in; to be made. He mentions being lost and without purpose as he had stayed so many years away from his country of origin. As he had previously worked in the USA, Spain and Paris. He hopes you will understand his longing to make a film in his home environment.

The article goes into detail about the struggles the actor has faced trying to build his craft and get his catalogue of films to market. It hasn’t been easy due to the political situation but he has studied hard gaining a bachelors of art in 1998 that allowed him to pursue a dream that he created for himself when he was just 14 years old. He had previously had to satisfy himself by working on Iranian television but by 2006 had transformed Iranian cinematography with 4 films.

A win at the Cannes film festival and Oscar nod in 2012 has suddenly brought his discography into the limelight. He was the first from his country to win an Oscar for a foreign language movie. Which he repeated in 2017 with honours from the Berlin festival too. He believed it was so important to showcase everyday life in Iran. It has stories about how family life still goes on despite difficulties. For the longest time he was not able to work in Iran. It mentions Donald Trump too and his fear of Iranians that was quite an issue for himself in 2015. However since he is now the biggest artist in Iran, he has become a celebrity.

Άνγκελα (This is how Angela Merkel’s name was written in a recent newspaper report and it’s always said with a hard g sound).